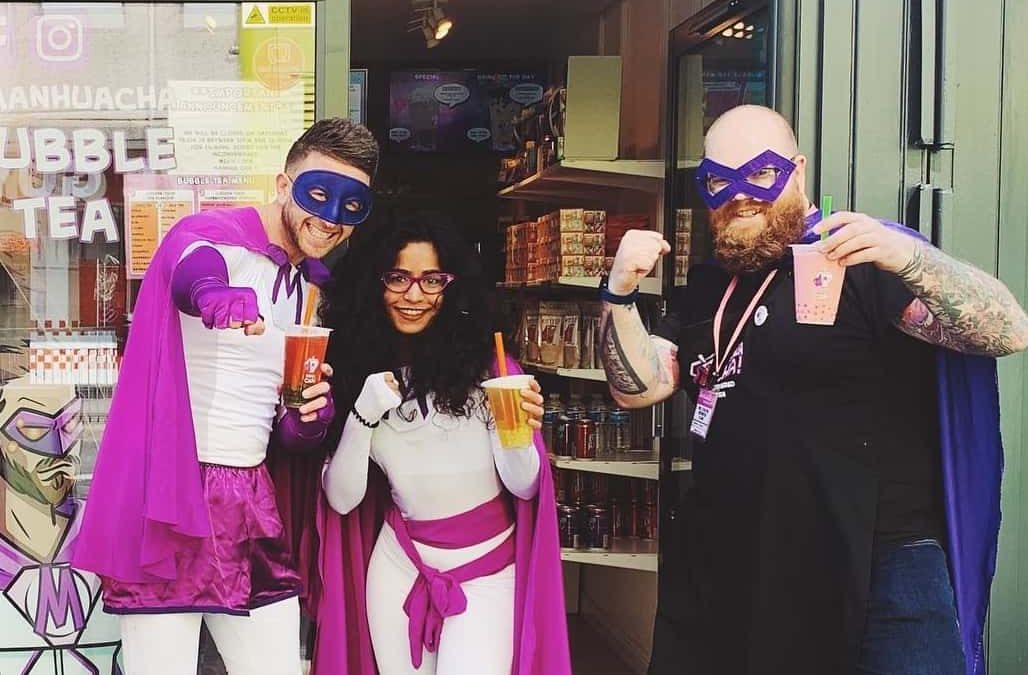 Manhua Cha, the popular bubble tea café in STACK Newcastle have been bringing their unique superhero characters to life on the streets of the city with the arrival of Captain Manhua and Ms Manhua.

The superheroes were stalking the city streets on Thursday 11th and Saturday 13th April as Manhua Cha seek to raise the profile of their bespoke comic book creations and drive interest in Bubble Tea kits with a special superhero design competition.

Captain Manhua and Ms Manhua distributed entries to their competition to encourage people to put their design skills to the test and deliver a new addition to the Manhua Cha comic book stable of characters.

David Hall and Carine Tsow launched Manhua Cha as a unique new venture for food lovers with an alternative comic-style take on Asian-style bubble tea cafés in 2016 with support from TEDCO. For two years, the pair built their bubble tea brand via a mobile unit before expanding to permanent premises in 2018 as part of STACK Newcastle.

The Asian-influenced beverage has rapidly grown in popularity in the region since its creation in Taiwan in the early 1980’s and Manhua Cha is now a popular addition to the range of unique food and drink establishments which make up STACK Newcastle.

Manhua Cha were initially guided on their business journey by TEDCO Business Support as part of the Start & Grow programme designed to help new ventures thrive through one-to-one specialist business mentoring and investment readiness advice. Manhua Cha have now also been chosen as one of only a few specialist businesses to undertake a new TEDCO programme to help more established ventures access intensive support to increase productivity rates for the region’s smaller businesses.

Co-owner David Hall explains: “We are huge fans of comic books and the entire Manhua Cha brand, from our menu to our flavours, has been influenced by comic book characters developed by Carine and I. Manhua means comic in Chinese and cha means tea so we are quite literally Comic Tea!”

“We design and create our own comic book and it is a major part of the ongoing brand development for Manhua Cha. We wanted to celebrate the Easter holidays this year by bringing those characters to life on the streets of Newcastle with our own band of superheroes stalking the city.”

David was first introduced to bubble tea through his wife and co-founder, Carine. Carine’s family are originally from Hong Kong and as life-long fans converted David to the joys of Bubble Tea flavours when the drink was only first starting to become available in the UK market. Over the past few years, the demand for bubble tea in the UK, and specifically Newcastle city centre, has grown rapidly as more and more people sample the delights of Bubble Tea and the more westernised take on the flavour combinations.

David continues: “The Manhua Cha superheroes will be handing out our comic book and drinks vouchers for bubble tea. We really wanted to bring more attention to our bubble tea at-home kits as we are constantly asked how to recreate Bubble Tea flavours in the kitchen. We have a range of bubble tea kits available online at www.manhuacha.com.

“We are really looking forward to seeing some of the entries to our superhero design competition – who knows, the next Manchua Cha comic book character could come from one of our talented customers!”